In honor of its 40th anniversary, Jordan Vineyard & Winery awarded $8,000 in cash prizes to Southern California artists as part of the iconic winery’s 4 on 4 Top 40 Wine Art Competition exhibition event on April 11, which was organized by Los Angeles Contemporary Exhibitions (LACE) and drew nearly 200 local wine lovers, artists and epicures to trendy Hadid Gallery for an elegant evening of blending wine, food and art. The artists created some fascinating wine paintings on canvas we wanted to share. 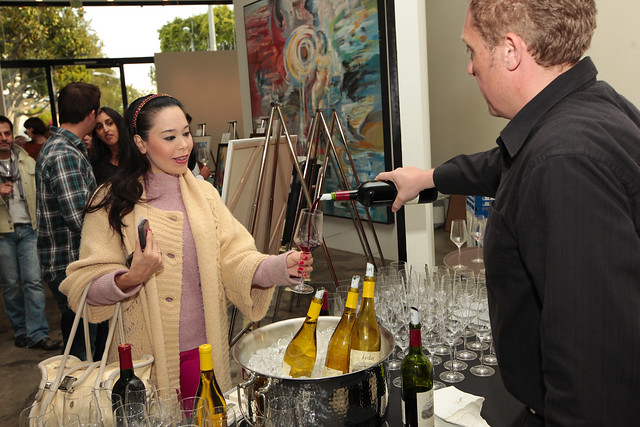 Carol Stakenas, the director of LACE, noted, “We were so excited to organize this competition with the LA art community, giving artists a fantastic opportunity that brought together the Los Angeles art scene and fine wine communities.”

The grand award winner of 4 on 4 Los Angeles was I Left My Heart In Jordan by Agne Jomantaite, a student at Occidental College, where Jordan Winery CEO John Jordan, ironically, did his undergraduate work. She is a noted artist on campus, has had work published and received several citations for her art. Jomantaite will receive a check for $5,000, and her work of art will be transformed into a limited-edition lithograph for Jordan’s loyal Southern California fan base.

First runner-up honors went to Mark Dean Veca’s The Elegant Fantasy of Jordan Chateau. Veca has exhibited throughout the United States, Europe, and Japan at institutions such as the Aldrich Contemporary Art Museum, PS 1 Contemporary Art Center, the Brooklyn Museum, the Bronx Museum of the Arts and the Yerba Buena Center for the Arts. His work has been reviewed in numerous publications, including The New York Times, Artforum, Art in America, Art Review, Juxtapoz and Flash Art. Veca will be presented a check in the amount of $2,000.

Kristi Lippire’s Unique Treasures of LA and Wine Country took home the second-runner up prize of $1,000. The Honolulu native has shown at ACE Gallery, the Riverside Art Museum, Pasadena’s Armory Center for the Arts, the Chicago Museum of Contemporary Art, the Orange County Museum of Art and elsewhere.

Patrons got to vote as well, each selecting a single favorite work of art in the 4 on 4 Los Angeles exhibit. The People’s Choice went to My Love by Kremena Ivanova. Ivanova describes her winning piece as “integrating the image of the movie industry, which is an emblem in LA. I used the film roll showing Jordan’s history, combined with the 40 year celebration, represented by the explosion from the end of the bottle.”

The three winning works from 4 on 4 Los Angeles will be on display at a private Jordan Winery 40th anniversary celebration for restaurateurs, retailers and media to be held in West Hollywood on April 23.

For more information about the 4 on 4 Los Angeles Art Competition, please click here. 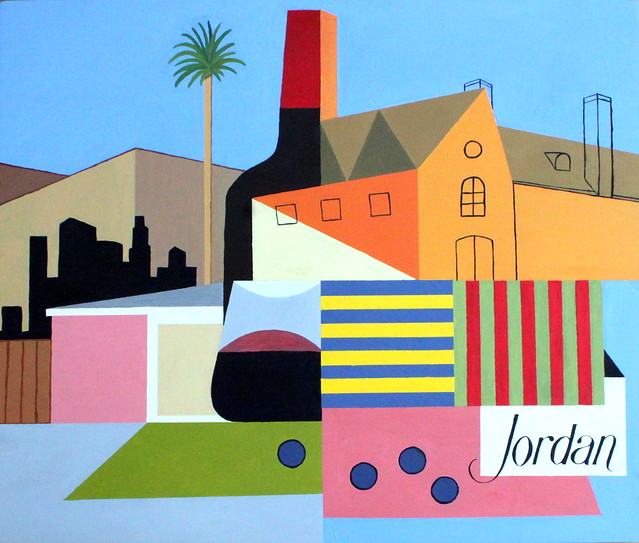 […] more information or the latest news on Jordan Winery, visit their blog or connect with them on their facebook […]

Sally Jordan tells then story of how she and Tom chose the bucolic Alexander Valley for the location of their Bordeaux ...